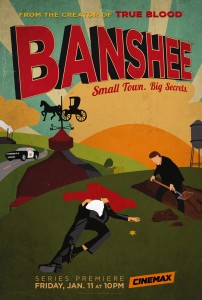 Cinemax has a brand new series kicking off tonight. And much like Strike Back and Hunted, expect lots of action. Banshee is from a producing team that includes True BloodÂ /Six Feet Under creator Alan Ball andÂ House M.D. executive producerÂ Greg Yaitanes:

Banshee Synopsis for the Pilot:

In a bizarre twist of fate, a recently paroled master thief (Antony Starr) assumesÂ the identity of Lucas Hood, sheriff-in waiting of Banshee, Pa., the same town where hisÂ former partner and lover (Ivana Milicevic), who changed her name to Carrie, relocatedÂ and remarried years ago. Keeping his history a secret as he awaits forged papers from Job (Hoon Lee), an unlikely New York City ally, Lucas befriends boxer-turned-bartenderÂ Sugar Bates (Frankie Faison), and settles into his new life as Bansheeâ€™s sheriff,Â overseeing deputies Emmett Yawners (Demetrius Grosse), Siobahn Kelly (Trieste KellÂ Dunn) and Brock Lotus (Matt Servitto).Â Itching for the thrill of thievery andÂ  yearning for Carrie, whoâ€™s now the wife ofÂ attorney Gordon Hopewell (Rus Blackwell) and mother of two, Lucas inadvertently getsÂ tangled up in the rampant corruption of shunned Amish gangster Kai Proctor (UlrichÂ Thomsen) while keeping a vigilant eye out for Mr. Rabbit (Ben Cross), the New York mobÂ boss who wants revenge against Lucas and Carrie for the jewel heist that landed Lucas inÂ prison. A party thrown by Proctor for the new sheriff is spoiled by a crasher, a member ofÂ the redneck Moody clan, who despise the Amish in general and Kai in particular.

Antony Starr [Lucas Hood]
The Role:Â An ex-con and master thief who assumes the identity of the sheriff of Banshee,Â Pa., where he continues his criminal activities, even as heâ€™s hunted by the shadowyÂ gangsters he betrayed years earlier.
The Actor: The New Zealander is making his American television debut with the lead role in Banshee. How huge is that for an actor? Starr [perfect last name for this business, by the way] was recently in an Australian independent film called Wish You Were Here along with Warrior and Zero Dark Thirty star Joel Edgerton.

Ivana MilicevicÂ [Carrie Hopewell]
The Role: Â Carrie was once a notorious jewel thief (and was Hood’s former partner in crime), but now lives in Banshee under an assumed identity with a husband and children who know nothing of her past.
The Actress: We’re used to seeing Ms. Milicevic guest star on every show under the sun. She recently did a couple episodes of CBS’ Vegas. Over the years, she’s appeared in Psych, Hawaii Five-O, Chuck, CSI: Miami and Charmed. Nice to see her in a series regular role on Banshee.

Ulrich Thomsen [Kai Proctor]
The Role:Â Kai is an intimidating and wealthyÂ  Banshee businessman who considers himself above the law. Disowned by his Amish family, Kai has a hand in nearly all of Banshee’s criminal enterprises.
The Actor: The Danish Thomsen is one of Europe’s most sought after actors having appeared in many movies including 1998’s art house hit The Celebration. He’s also guest starred on FOX’s Fringe as Man in Zeppelin aka Mr. X. We have to love any actor who’s been on Fringe.

Frankie Faison [Sugar Bates]
The Role:Â Sugar is a former boxer, an ex-con and the owner of the local watering hole, The Forge. Sugar knows Lucas’ secret past and has his back.
The Actor: Faison is a movie and TV veteran having starred in all four Hannibal Lecter films. He’s also been in the movies Meet the Browns, In Good Company and The Thomas Crown Affair. On the small screen, he’s known for being on shows like The Wire, The Good Wife, Grey’s Anatomy (as Bailey’s dad), The Cosby Show and the late great daytime soaps All My Children and One Life to Live.

Hoon Lee [Job]
The Role:Â Job is a cross-dressing hair stylist and genius computer hacker who plays a key part in Lucas’ criminal endeavors.
The Actor: Lee is in the big screen flick Premium Rush that stars Joseph Gordon-Levitt and has guest starred on White Collar, Royal Pains and Fringe. He’s also the voice of Splinter on the current Teenage Mutant Ninja Turtles incarnation.

Matt Servitto [Brock Lotus]
The Role:Â The Banshee sheriff’s department longest serving deputy, Brock is surly by nature and resents Lucas for taking the job he wanted.
The Actor: Servitto kicked off his career as Trask Bodine on All My Children but over the years he’s been on The Sopranos, Brotherhood and Harry’s Law. And he’s done guest star spots on a ton of shows including: Suits, Person of Interest, NYPD Blue and Sex and the City. He’s also appeared on the big three Law & Order series: the original, Special Victims Unit and Criminal Intent.

Ben Cross [Rabbit]
The Role:Â Rabbit is a ruthless Ukrainian gangster who has been hunting down Lucas and Carrie since they betrayed him 15 years earlier.
The Actor: You may know the awesome Ben Cross from his role in 1981’s Oscar-winner for Best Picture, Chariots of Fire as well as J.J. Abrams’ recent Star Trek reboot from 2009. On TV, he was in the ’80s mini-series The Far Pavilions and The Citadel; in the 1991 short-lived Dark Shadows revival (he was Barnabas Collins); and the recent Lifetime TV movie William & Kate. 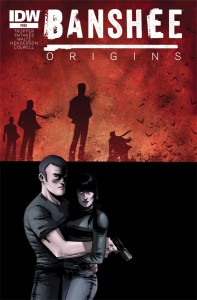 If you want even more of an opportunity to delve into this dark, new world, there’s a comic called Banshee Origins, where you can get even more of the show’s backstory. It also sets up the very first episode. You can find it at cinemax.com.