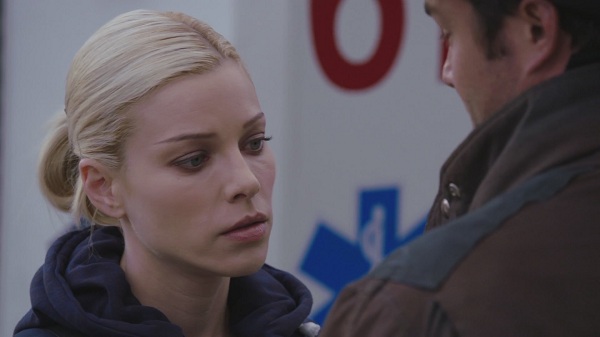 All of us are probably in a hustle and bustle to get those last minute gifts for Christmas, but itâ€™s not the gifts that are the heart of it all â€“ the holidays are about family and the ones dear to us.Â  Wow, and tonightâ€™s Chicago Fire demonstrated that loud and clear.Â  It showed us thereÂ aren’tÂ too many things any of us wouldnâ€™t do for our family, but it also illustrated what happens when too many boundaries have been crossed.

The focus of the entire episode revolved mostly around Jose Cruz (Joe Minoso). Â From the past few episodes,Â we’veÂ seen his desperation in trying to get his little brother, Leon, out from a gang that has a grip on him, but the price for doing that is $10,000, which of course he does not have.Â  The first call of the night is a kitchen fire in a very well-to-do neighborhood.Â  The fire is put out in minutes, but the real drama comes afterwards when the owner of the house accuses one of the firefighters of stealing her diamond necklace, worth over $50,000.Â  I thought this part of the episode was superbly written for two reasons.Â  First, I can bet you that 99.99% of the viewers thought Cruz stole the necklace.Â  This was his brother for crying out loud, and he needed the money.Â  I donâ€™t think anyone would have guessed that it was just an insurance scam because the family was going bankrupt.Â  The second reason thisÂ story lineÂ was so fantastic is because it gave us another breadcrumb about Lieutenant Caseyâ€™sÂ  (Jesse Spencer) family.Â  Casey has this huge chip on his shoulder about something the head of Internal Affairs said about his mother ages ago in the Academy, and then, we know from a previous episode that there is some kind of rift in the family.Â  This gives us just another little piece of the puzzle.

But, the huge shocker of the episode comes with a house fire that appears to have been started by the same gang that Joseâ€™s brother is in.Â  Gang members are still inside and actually fire shots at the squad, but fearing that Leon is inside, Jose steps up, is the hero and breaks through the door anyways.Â  Several innocent people are inside and are rescued, but still no sign of Leon.Â  Jose finally makes it to the top floor and thinks that he has found Leon and is about to rescue him.Â  Then, comes the huge mother of a twist and probably one of the biggest moral dilemmas Iâ€™ve seen on television in a long time.Â  Instead of Leon, there lies the gang leader that had been demanding $10,000 to let Leon out of the gang.Â  The guy is trapped, begging for help, and you can tell that Jose is struggling.Â  Can you imagine what would go through your mind?Â  This guy just gunned down 3 people the day before, was a murderer, and probably was going to get your baby brother killed.Â  Would you leave him there to die?Â  Jose did. Would I have done the same thing?Â Â  Umm, probably.Â  What did I say about family and its importance?

Speaking of family, while Leslie Shay (Lauren German) and Kelly Severide (Taylor Kinney) arenâ€™t family, they are best friends, admittedly love each other and are as close as family. Shay and Dawson (Monica Laymund) are finally questioned by Chief Boden (Eamonn Walker) about some missing drugs from a previous scene, which of course we know Shay gave to Severide.Â  Dawson hasnâ€™t a clue what is going on, but Shay perjures herself and says the same.Â  I love the scene that comes next when Chief Boden just looks at Shay, knowing full well that she is lying, but ends us saying nothing.Â  Iâ€™m not sure why.Â  Perhaps when sheâ€™s ready, sheâ€™ll come forward and tell the truth?Â  Either way, he is trusting in her. But, the entire mess does ruin Shay and Severideâ€™s relationship because she comes to find out that heâ€™s found another supplier.Â  Shay just risked her career for her best friend, and all he cares about is himself.Â  So, it looks like Severide will be spending Christmas alone, or maybe with his hottie new girlfriend, Renee Royce (Sarah Shahi).

However, the best parts of the entire episode are in the last 5 minutes, and so, if you missed it for some reason, you need to go watch the last few moments because so many major things happened so fast.Â  Jose canâ€™t live with the guilt of letter the gang member die and possibly leaves a confession on Caseyâ€™s phone.Â  We finally find out the back-story of Caseyâ€™s mother when he visits her in prison, presumably for killing his father. And, Shay and Dawsonâ€™s EMT are slammed in a huge crash, and we are left hanging if either survives.

What a fantastic episode.Â  This is by far the best episode of the entire season, and if I had to give it a grade, it would be an A+.Â  But, Dick Wolf â€“ dang it!! You really know how to keep your viewers dangling over the Christmas holidays.Â  Fortunately, we have to wait only 2 weeks to find out fates of Cruz, Dawson, and Shay, whose lives and careers hang in the balance.

Most Memorable Quotes and TidbitsÂ

Relationship Recap: The Bravermans Have The Sex Talk

We Need to Know: Why Do Designers Refuse to Listen to Tim Gunn on Project Runway?