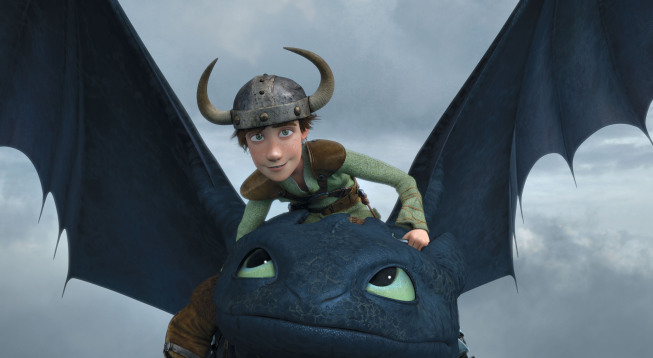 On Monday night, Fox presents a brand new holiday special called Dreamworks Dragons: Gift of the Night Fury. The 30-minute cartoon is based on the hit How to Train your Dragon film franchise.

A synopsis: Gift of the Night Fury is a story of faith, love and friendship that takes viewers on an adventure of dragon-sized proportions as the villagers of Berk prepare for the winter holidays. As the festivities approach, the dragons make a sudden mass exodus, leaving Hiccup, Astrid, Stoick and the rest of the gang saddened by the loss of their winged friends. A wild turn of events leads Hiccup to discover a mysterious, never-before-seen island and learn the true reason why the dragons left the village. Friendship and loyalty abound in this touching holiday tale of spreading oneâ€™s wings, but always staying close to home. As Hiccup says, â€œThe only real comfort against the cold are those you keep close to your heart.â€

The voice cast includes Jay Baruchel as Hiccup. Baruchel voices Hiccup in the How to Train your Dragon movie as well as its sequels that are due in theaters June 20, 2014, and June 18, 2016. On TV, he was in the short-lived series Undeclared (a show that also featured Seth Rogen, Jason Segel and Sons of Anarchy star Charlie Hunnam). On the big screen, he was in Knocked Up and Tropic Thunder.

Other actors reprising voices are Gerard Butler as Stoick and America Ferrara as Astrid. Ferrara is, of course, best known for playing the lead role in Ugly Betty. Her TV work has also included a few episodes on CBS’ The Good Wife. She was also the central character in a web series called Christine. She played a woman trying to find the right guy while speed dating. But all is not what it seems. Christine can be found on the WIGS channel available on YouTube. Ferrara is also known for starring in the moviesÂ Real Women Have Curves and The Sisterhood of the Traveling Pants films.

Dreamworks Dragons: Gift of the Night Fury airs Monday night on FOX at 8/7c. Check out a clip from the special over at our Tumblr site.

In Memoriam 2012: The Walking Dead