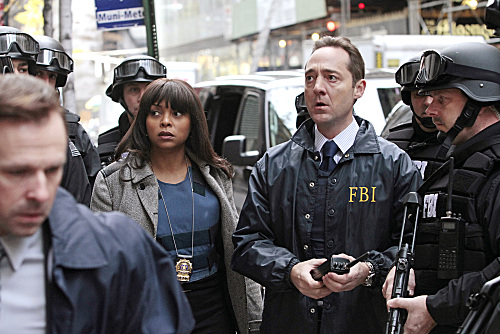 I hear you, John, because I do too.Â  My father was a World War II Veteran, and last nightâ€™s mid-season finale really hit home for me.Â  Besides that, it left you with a hell of a cliffhanger, but with an almost comical twist.

The number this week is that of Abby Monroe (Jessica Collins), a seemingly sweet girl who had worked at a charity, â€œHomes For Our Returning Heroesâ€, whose focus is giving low-interest loans to veterans.Â  Abby stumbles onto a scheme by her boss, Philip Chapple (John Bedford Lloyd), of providing these loans, tripling the interest rates within the 1st year, and then, reaping in the profits once the veteransâ€™ homes are foreclosed on.Â  This is the type of scheme that just makes your skin crawl.Â  So, after meeting and befriending one of the veterans, Shayn Coleman (Brian J. Smith), who Chapple had ripped off, she decides to do something about it.Â  What is her plan?Â  Itâ€™s to break into the bank where Chapple is keeping all of his dirty money in a safety deposit box, taking it back, and then, more than likely, giving it back to the veterans he stole it from.Â  Boy, do I like this girl!Â  It sounds like something Iâ€™d do if I had the nerve to pull if off.

While all of this is going on and with HR allegedly dead in the water, FBI Agent Donnelly (Brennan Brown) has refocused his efforts on catching the infamous â€œMan in the Suitâ€ and asks Detective Carter (Taraji P. Henson) if she would like a temporary assignment in helping to track him down.Â  Holy crap, what a position to be in! Â She accepts the position, but donâ€™t worry, folks, sheâ€™s still playing both sides, because she gives Reese and Finch (Michael Emerson) the heads up that Donnelly is onto them. Â Donnelly still doesn’t know jack of what is going on, but he does know about the cloning of the phones, which is enough to track down Finch and Reese.

With Carter spinning her own drama over in the FBI world, HR is trying to rebuild its organization, and to some of the viewersâ€™ dismay, our cute Detective Beecher (Sterling Brown) is in the middle of the entire mess, and is helping the head of HR, Quinn (Clarke Peters), in trying to recruit new membership.Â  The good news is Detective Fusco (Kevin Chapman) is finally growing some balls and really makes it clear to Simmons (Robert John Burke) that he doesnâ€™t give a crap about his trying to pin the Davidson murder on him anymore.Â  Good for you, Lionel!Â  We were fortunate enough to be on a conference call with Executive Producers Jonathan Nolan and Greg Plageman this afternoon, and they were asked about Fusco and why in the hell doesnâ€™t he just ask for help from Reese and Finch.Â  This was even brought up in our review of last weekâ€™s episode “C.O.D.”, as Finch could easily make the video footage of Fusco and Davidson disappear in about 5 seconds. We are not allowed to give any details yet about the upcoming episodes, but they did promise that that question would be answered in the first few episodes in 2013.

Now, for the ending and the cliffhanger.Â  For those who have been fans of Person of Interest since the beginning, you should remember the season one mid-season finale â€œNumber Crunchâ€, where CIA Agent Snow (Michael Kelly) catches up with Reese and shoots him.Â  Fortunately, and thank God, Reese isnâ€™t shot this time, but heâ€™s certainly â€œin a pickleâ€, as Reese puts it himself.Â  Being a veteran himself, Reese decides not to just do his job and save Abbyâ€™s life but help her and Coleman achieve their mission.Â  With these scenes, this is where you can see just how much the John Reese character has evolved from that very first day we meet him in the Pilot.Â  ReeseÂ isn’tÂ the â€œrobotâ€ anymore just following orders from his boss, Mr. Finch.Â  Itâ€™s not just about following Finchâ€™s direction and saving a personâ€™s life, but itâ€™s about doing what is right.

He pulls it off too.Â  They retrieve the safety deposit box, get it to Finch, and Abby and Coleman escape.Â  But, Reese sacrifices himself to help them escape, with the FBI showing up at the bank, with Carter and even Fusco in pursuit of the â€œMan in the Suitâ€.Â  But, hereâ€™s the twist.Â  How many of you have seen the movie â€œThe Thomas Crown Affairâ€?Â  Remember the ending with all of the men running around, looking just alike, in bowler hats?Â  Well, the ending of this episode reminded me of that movie and proves that the writers of this fantastic show do have a sense of humor.Â  With their hands up, ready to be arrested, we have Reese standing there, but also 3 of Chappleâ€™s knuckleheads.Â  And, the twist of the twist is that itâ€™s the FBI who is there and not the CIA to make the arrest, and so, no one can identify the real â€œMan in the Suitâ€ (well, Carter could butÂ doesn’tÂ of course).

Regardless, Reese is heading to jail.Â  On the same conference call today with Nolan and Plageman, we did ask them about Elias (Enrico Colantoni) and whether he could possibly end up being an ally of Reese and Finch.Â  I had wondered about that ever since Elias seemed to have an odd connection to Finch when Finch went to visit him in prison. Of course, theyÂ wouldn’tÂ reveal any details, but Nolan responded, â€œInteresting question.Â  And, with Reese now going to jail where Elias is tooâ€¦â€Â  Hmmmmâ€¦..

Yes, all sorts of interesting questions, but the good news is that we donâ€™t have too long to wait.Â  Person of Interest returns on Thursday, January 3Â at 9/8cÂ on CBS.

Dear Show: A Letter to the TPTB @ The Vampire Diaries

Character Development: Detective Kate Beckett, Castle in “Under the Gun”