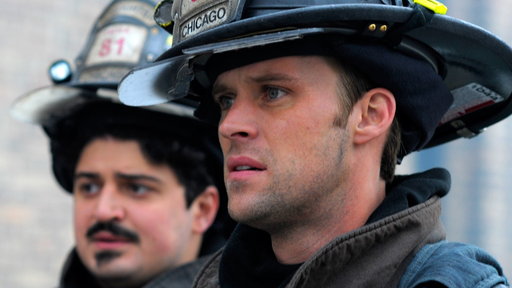 Wow, tonightâ€™s episode of Chicago Fire was a super-emotional one.Â  Since day one, weâ€™ve seen Severide (Taylor Kinney) struggle with his shoulder injury, masking it by taking painkillers that Michael Jackson wouldnâ€™t even touch.Â  Sadly, so far, heâ€™s gotten away with it, kept his job, and has gone on living his life.

Jose Vargas isnâ€™t as fortunate.Â  We havenâ€™t seen much of this character, but â€œIt Ainâ€™t Easyâ€ is all about this man we barely knew.Â  The only thing we really saw is that he worked his ass off to make it to the squad and was so proud that very first day on the job.Â  Little did he know that would all be taken away in only a few weeks. The terrible part is it was all because of the suspected â€œfire-bugâ€ Ernie that Chief Boden (Eamonn Walker) has been tracking for the past couple of episodes.Â  The fire that is set spreads to a warehouse and ignites some magnesium, which is inhaled by Vargas.Â  That causes permanent lung damage, thus forcing him to leave the squad and go on long-term disability.Â  The entire situation is so depressing because itâ€™s the holidays, Vargas appears to have no family, and the only real friends and family were in that squad.

The good news is Chief Boden is onto the kid that appears to be setting these fires.Â  The boyâ€™s parents are gone, but heâ€™s staying in house rented to a man by the name of Raymond Merlin, who spent 8 years in Statesville prison for felony arson.Â  Surprise, surprise.!Â  It looks like Ernie has found a very bad father figure who has gotten him into doing his same bad habits.Â  Hopefully, he can be caught in time before someone gets killed.Â  A firefighterâ€™s life has already been ruined, which is bad enough.

On a positive note, we finally get to meet Severideâ€™s potential new love interest, Renee Royce, who we should recognize from Fairly Legal.Â  Severide saves her life in a car accident and shows up with fancy chocolates and a lunch invitation.Â  Even though Severide seems to bang everything that moves, he respectfully declines her invitation, but she is persistent and shows up again later stating, â€œâ€Itâ€™s been over 30 minutes and it still hasnâ€™t worn offâ€.Â  So, Renee Royce and Severide have their dinner date, but the very cool thing is that he invites Vargas, who is obviously struggling and really just needs some company.Â  That would put off some girls, but instead, Severide gets a pretty good kiss for it and a nice comment, â€œSeveride, youâ€™re a good manâ€.Â

That was the high note of the episode, but the episode ends in a very somber tone, and I think itâ€™s an omen of things to come for Severide.Â  Vargas pretty much lost his entire career and life in a momentâ€™s flash and is about to kill himself.Â  As usual, Lieutenant Casey (Jesse Spencer) is quick on his feet and makes Vargas remember some very good moments in his career:

Vargas is talked off the ledge with Casey telling him, â€œ51 is always going to be your houseâ€.Â  Vargas is completely in tears, and I donâ€™t think there are very few viewers that werenâ€™t in tears as well (myself included).

Renee Royce may see a good man in Severide, and from the beginning of the series, I have seen the goodness and integrity as well.Â Â  But, this guy needs to step up and face the music.Â  For Christ’s sake, Severide, grow a set of balls! Vargas was put on disability for a reason â€“ he wasnâ€™t fit to do his job and could endanger other peopleâ€™s lives, including the ones he may be trying to save.Â  Severide is doing the exact same thing, which pisses me off.Â  The situation probably wonâ€™t end well for Severide but at least he has a chance to come back to the squad after his injury is corrected â€“ that is something that Vargas didnâ€™t have.

What They Said: Favorite Quotes from NCIS "Devil's Trifecta"