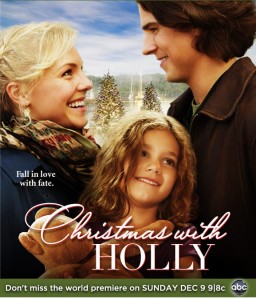 I confess. I’m a total sucker for predictable holiday movies especially for ones as adorable as Hallmark Hall of Fame: Christmas with Holly. Sometimes the Hallmark movies run a litte too cutesy for me, but I totally fell for this one.Â Maybe it’s because Sean Faris and Eloise Mumford are the two leads. They share an abundance of chemistry which makes rooting for their characters to couple up very easy.

Faris plays Mark Nagle, a coffee shop owner, who becomes guardian to his niece after his sister dies. The actor, who bears a striking resemblance to a young Tom Cruise, starred in the short-lived FOX series Reunion. He also appeared in a few season 1 episodes of The Vampire Diaries as well as a couple season 4 episodes of TNT’s Leverage.

What I appreciate most is that I’ve always seen Faris play the bad boy or the villain. In this Christmas flick, he’s a nice guy put in a situation that he’s not sure he can handle, so we see him struggle as he attempts to raise a six year old.

Mumford is Maggie Conway, who opens a toy shop on the island town she moved to after being jilted at the altar. It’s all work and no play at first. But it’s funny how she keeps running into the handsome guy with the little girl who hasn’t spoken since her mom died.

You may recognize Mumford from her role on FOX’s Lone Star. Unfortunately, viewers didn’t give the critically-acclaimed series a shot — only two episodes aired before cancellation. Last season, she starred on ABC’s The River, a supernatural drama that didn’t receive a renewal.

One of my favorite aspects of the movie has to be Mark’s relationship with his brothers and how the presence of their niece affects how they interact with each other. Plus, even though the locale is supposed to be Friday Harbor, Washington State, the movie was filmed in Nova Scotia. The view is gorgeous.

Hallmark Hall of Fame: Christmas with Holly premieres tonight at 9/8c on ABC.

Promo (right after The Makeover)Â