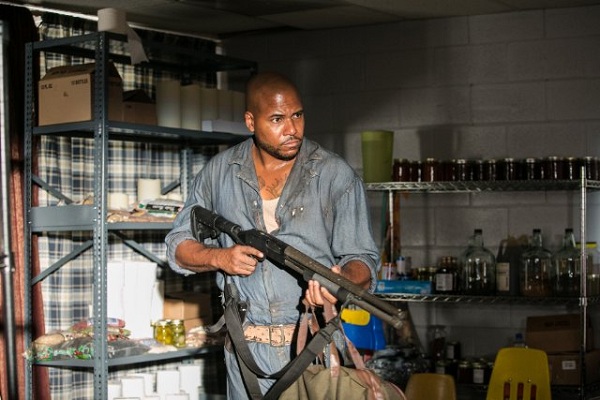 Okay, folks, it’s getting down to the wire. Â Rick (Andrew Lincoln) has at least temporarily accepted Michonne (Danai Purira) into their group, and they are on their way to Woodbury to recover their teammates Glenn (Steven Yeun) and Maggie (Lauren Cohan). Â And, all this other crap is up in the air like nobody knowing that Merle (Michael Rooker) is part of the Woodbury team and Andrea (Laurie Holden) has become, ummm, more than friendly with The Governor (David Morrissey). Â The mid-season finale is tonight, and sh*t is about to hit to fan — and hard.

From everything that has been leaked, literally no one has seen the episode yet, but there are a few rumors. Â First, there’s the rumor that we’ll get the introduction of another character from the comic-series, Tyreese. Â He’s a bad-ass former NFL football player, and is supposed to play a large part in the series. Â But, with the additional rumors of a possible character death, my guess is that we might be saying good-bye to Oscar (Vincent Ward). Â With the introduction of Tyreese, the characters would be too much alike, and so, the elimination of Oscar makes sense. Â But, we’ll have to wait and see. Â If Oscar is the victim, it will be a shame because I kind of liked the guy. Â Of all of the prisoners, he stuck by Rick and saved his life when the idiot prisoner Andrew tried to betray them and take out his revenge on the group.

And, what about Penny, The Governor’s freakish walker daughter? Â In the below previews, we see Michonne stumbling on Penny by accident, thinking she is just an ordinary girl. Â Imagine her shock when she finds out she’s a walker who The Governor is trying to save using these futile experiments run by Milton (Dallas Roberts). Â I did watchÂ The Talking DeadÂ  last week, and I was absolutely shocked that they thought Michonne would be reluctant to kill a child. Â Have we already forgotten the Pilot? Â Who is the first walker that Rick encounters and has to kill in the Pilot? Â  It’s that seemingly sweet little girl in the pink robe played by the fantastic Addy Miller. Â Child or not, Penny’s still a walker and needs to be eliminated like any other biter.

Basically, clear your schedules tonight, folks, and have a few shots of good scotch before the episode, because with the showdown that I am suspecting is coming, you’ll need it. Â Here are some exclusive sneak peeks:

The mid-season finale of The Walking Dead airs tonight at 9 p.m. EST on AMC. From there, it will be returning for the second half of the season in February 2013.

The Walking Dead "Made To Suffer"

Parenthood Preview: “We Made It Through the Night”