Person of Interest “Til Death” 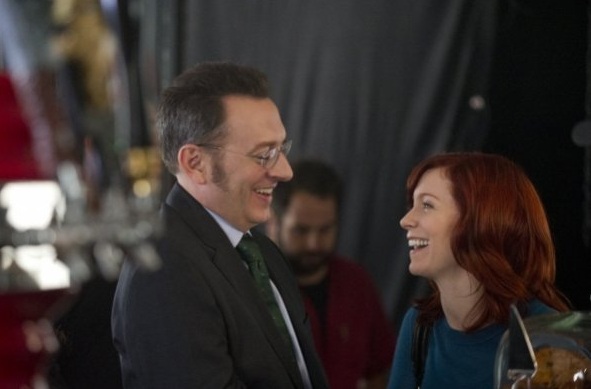 Says who? I truly loved the Married With Children sitcom, but as tonightâ€™s Person of Interest illustrated, this phrase is so full of crap it needs its own septic tank.Â Â  Well, thatâ€™s almost true.Â  There is one rare exception, and with that storyline we get some of the most magnificent character development of the entire series.

Thereâ€™s double trouble in this weekâ€™s Person of Interest when two numbers come up at the same time, and the irony is they are man and wife.Â Â  Letâ€™s introduce Daniel (Mark Pellegrino, Lost) and Sabrina (Francis Swift) Drake, the co-CEOâ€™s of a very large publishing firm.Â  Every day they publish stories, some not very nice that could potentially piss off the wrong kind of people.Â Â  So, when their numbers come up, the first inclination is that the perpetrator is a group like the Maryland Militia, who the company wrote a very unflattering piece about.Â  But, surprise, surprise, thatâ€™s nowhere close because the real threats are the husband and wife themselves.Â  One wants to sell the company, the other doesnâ€™t, and their solution is to kill each other off.Â  Wow, when they say love can turn into hate in a split second, thatâ€™s an understatement.

While this case and saving these two peopleâ€™s lives was, indeed, the point of the episode, it certainly wasnâ€™t the focus.Â  This episode, instead, was all about relationships, and while this coupleâ€™s relationship may have taken a bad turn, the center of attention was on the ones that truly were good â€“ or at least had the potential of being good.Â  Ever since that episode in season one where we are introduced to Finchâ€™s (Michael Emerson) fiancÃ©e, Grace Hendricks (Carrie Preston), weâ€™ve been wondering if weâ€™ll get more of that back story, and fortunately for us, we got the mother load tonight.Â  I love how the writers portray Daniel and Sabrina Drake, two outgoing people who you would think would excel in relationships and compare them to a couple like Finch and Grace â€“ two people who had virtually no experience with relationships at all.Â  The twist is the awkward Finch and Grace know 1000 times more about relationships and how to treat the person you love with honor and respect than the whole bunch.Â  I bet all of the viewers are either in complete awe or jumping for joy after seeing the flashbacks with Grace and Finch.Â  We have their first date in the coffee shop, and then, of course, the marathon â€œBirthday Scavenger Huntâ€ that Finch sets up for Grace.Â  Of all of the women reading this review, how many of you have had a guy done something like that for you for your birthday, or any day of the year?Â  The only thing that was truly heartbreaking was at the end of their date when Finch wanted to tell Grace the truth about him and what he truly was about.Â Â  She quickly stopped him and said, â€œOur journey has just begun.Â  Any mysteries will be discovered in timeâ€. Â Time. That is something that I bet Finch never knew he had so little. I wonder how differently things would have turned out if she hadnâ€™t interrupted him, and she discovered the truth from the beginning.Â  Without a doubt, she would have stuck with Finch through it all.Â  Wow, those were some powerful scenes.

On another positive note, fans have been wondering when Fusco (Kevin Chapman) would get a love interest, and tonight was his lucky night (well, not that kind of â€œluckyâ€ but you know what I mean).Â  Her name is Rhonda (Tricia Paoluccio), and she seems like a good fit for Fusco.Â  She has a cousin who is a cop, and so, she understands the work and the long hours.Â  And, she totally thinks the work Fusco does is way cool.Â  Assuming she doesnâ€™t get killed on one of Fuscoâ€™s other â€œstakeoutsâ€, I have high hopes for this couple.Â  Good for you, Fusco!

While I still give this episode a very strong â€œAâ€, I do have one complaint.Â  I totally do not buy Daniel and Sabrina Drake kissing and making up after a meal, some cheap wine, and one photograph of when they were actually happy.Â  For Godâ€™s sake, they just tried to off each other!Â  Love can turn to hate in a split second, but the reverse takes a lot more effort.Â  Even super-romantic, Mr. Matchmaker Finch I donâ€™t believe could pull that off. It made for a happy ending and had the effect of making you feel all warm and fuzzy, but unfortunately, it felt way too clichÃ©d and fake to me.

All in all, I thought this was a fantastic episode, again a very character-driven one, which as I have said time and time before, is the main strength of this series.Â  The one thing on my mind, as it is Iâ€™m sure on most other viewers mind is the question of whether Finch and Grace will get a second chance.Â  With Finchâ€™s final statement, I think it may be an omen that the answer is â€œyesâ€:

Other memorable quotes and tidbits

Bravo's LOLwork "Coffee is for Closers"

Bite-Worthy Moment: Klaus compels Stefan to remember their shared past, The Vampire Diaries “The End of the Affair”

We Need to Know: Did Brittani Deserve to be Sent Home for Her Unprofessional Behavior on ANTM?

Schmidt’s Laundry List of Douchery, New Girl “Story of the 50”