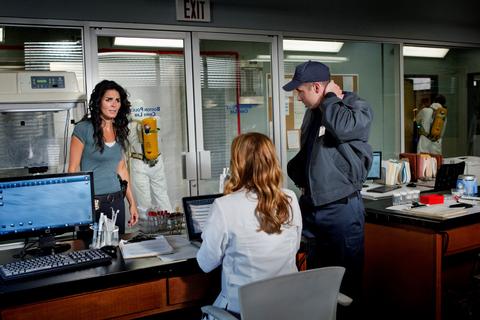 TNT’s hit series Rizzoli & Isles is about to return with five new winter episodes. The cop show has averaged nearly 8 million viewers in its third season. And as the action picks back up, the show will be dealing with some baby mama and (potential) baby daddy drama. Here’s what to expect:

Synopsis for “Class Action Satisfaction”: When a man having breakfast in the Division 1 CafÃ© dies from poisoning, Jane and the team must quickly find the source as Angela and the irascible Stanley both come under scrutiny. Meanwhile, Tommy wants proof that heâ€™s the biological father of Lydiaâ€™s baby as she returns to take the baby back. And Detective Korsak is reunited with one of his ex-wives.

From this particular synopsis, it looks like Colin Egglesfield will return as Tommy, Jane’s loveable screw-up of a brother; Alexandra Holden is back as his possible kid’s bio mommy, Lydia. Remember, the summer run ended with Lydia giving birth and leaving the child on Jane’s front porch. A week ago, Holden played one of the bad guys on NCIS in an episode called “Shell Shock Part 2.” And if Stanley’s going to be around, that means the actor who plays him will be around too. Alan Rachins (L.A. Law and Dharma & Greg) is Angela’s boss at the cafÃ©. Now which one of Detective Korsak’s ex-wives are we going to see? We’ve already met Melody Patterson (played by Lolita Davidovich). Will we meet a different ex-wife this time around? Dancing with the Stars: All-Stars, Week 9