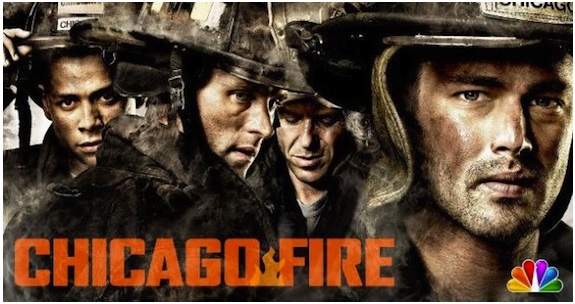 First, I would like to congratulate the cast and crew of Chicago Fire for getting a full season order.Â  As we know, NBC doesnâ€™t have a very good track record with new shows, and we fans have been nervous about a season pick-up for quite some time, but at least that worry can finally be put to rest.Â  Last nightâ€™ episode â€œTwo Familiesâ€ was your typical Thanksgiving holiday episode, and while it did a fantastic job in delivering the message about family and thankfulness, it fell short in the story line department.

The two main storylines at work in the episode are the Lieutenant Casey (Jesse Spencer)/Hallie (Terri Reeves) relationship and the ongoing struggle Kelly Severide (Taylor Kinney) with his addiction to prescription painkillers.Â  The Severide story line is actually quite painful to watch because deep down, the character is as good as gold. Of all of the firemen in the squad, I have the most respect for Severide and feel that he has the highest level of integrity.Â  However, the man certainly doesnâ€™t know how to handle his own problems.Â  Last nightâ€™s predicament of a mandatory drug test I think we viewers could have seen coming from a mile away.Â  And, with Severideâ€™s former drug supplier Leslie Shay (Lauren German) constantly covering for him and backing him up, it also wasnâ€™t a surprise to see her providing him clean urine to where he would pass the drug screening.Â  I am very interested to see how all of this will pan out considering Severide is one of the main characters on the show, but last nightâ€™s story line was way too predictable, and honestly, quite boring.

The same think holds true for Casey and Hallieâ€™s relationship.Â  Earlier in the season, Casey assists in an accident where one girl lives and one girl dies only due to a matter of luck.Â  During that very emotional moment, he and Hallie reconcile, with Casey telling her that children do not matter to him â€“ Hallie is the only one he wants.Â  While that was certainly cheesy and may have even gained a Kleenex box or two, feelings like that donâ€™t pass.Â  Wanting to have children is a big deal, and while the feeling may subside for a short while, itâ€™s ugly face will only resurface. This is especially true when an event happens like Casey having to deliver a baby in the middle of a 10-car pile-up on the highway.Â  Events like that change you, and thatâ€™s when he tells Hallie that not only does he want children, but very soon.Â  You donâ€™t even have to hear Hallieâ€™s response, but see the look on her face to know what she is really feeling.Â  That is never going to happen, and that relationship is not going to last.Â  Again, this is another plot that I think most viewers could see coming.Â  The good news is I think that Dawson (Monica Raymund) may be back in the game.Â  Casey and Dawson meet up at a bar at the end of the episode, and even though Casey says everything is fine, something tells me those two will end up together.Â  They certainly seem like a better match than Casey and Hallie.

So, while I do have some complaints about the story lines being too predictable and somewhat boring in this episode, the Thanksgiving part was fantastic.Â Â  This group of firefighters is definitely a family and through hell and high water, they were going to have their Thanksgiving dinner.Â  One particular minor character, Otis (Yuri Sardarov), that we havenâ€™t seen too much of since the beginning of the series really stole the show in this regard.Â  He decides to start a pod cast, which at first seems like one of his typically stupid ideas, like his complaints about the goat image on the fire trucks.Â  But at the end of the episode, his message on his first pod cast is what pulled everything together and made an episode that was just “average” to “very good”:

â€œA lot of people out there wonder why we do this job.
Itâ€™s true, some days are bad.
We grope around in zero visibility, hoping we grab and arm or a leg & pull someone to safety.
Sometimes we can search the entire room and come up empty.
Then, you hear about the kid you missed under the bed.
I donâ€™t care who you are, I donâ€™t care how many years youâ€™ve been on this job.
You think to yourself â€“ how did I miss that?
How did I not reach a few feet further?
Yes, there are days you want to pick up your helmet & chuck it in the lake.
Some days you get to see things no one gets to see.
A wife grateful you dragged her husband to safety, and every once in a while, you see aÂ  baby take its first breath in a 10-car pile-up .
These are the good days.
You want to know what Iâ€™m thankful for â€“ Iâ€™m thankful for because I have 2 families, and not too many people can say that.â€

Other interesting quotes and tidbits

Chicago FireÂ airs on Wednesday nights at 10/9c on NBC.

The Walking Dead Preview: "When The Dead Come Knocking" [VIDEO]

Nashville: Top 10 Reasons Why I'm Thankful For This Show

Secrets and Lies on Person Of Interest “Legacy”

NCIS “Spider and the Fly”