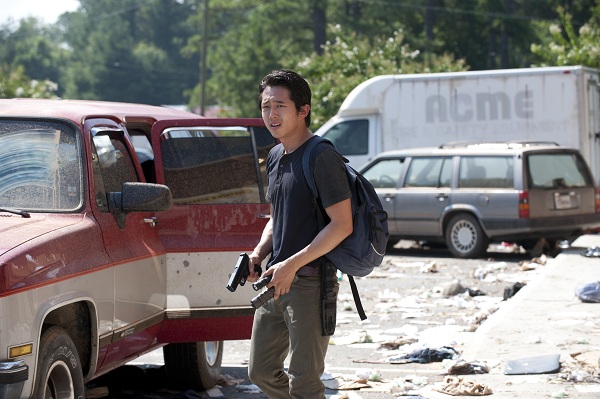 Gee, whiz, man. The past two episodes of The Walking Dead have been a killer — literally. We lost two dear characters (and possibly a third), and then, we have Rick (Andrew Lincoln) going completely off the deep end. But, the biggest question mark is that mysterious phone call.

Just who is on the other end of that phone? Even though we assume the gorged walker that Rick finds consumed Lori’s (Sarah Wayne Callies) flesh, just where is the skeletal remains of the body? Because of these big clues, a good deal of the viewers are guessing it’s Carol (Melissa McBride) calling on the phone and had taken what was left of Lori’s body. Â Another theory that’s got fans buzzing is that it could be Morgan. Â You remember, Morgan, right? Â He’s the guy in the Pilot who saved Rick’s ass and nursed him back to health. Â They communicated for a while with walkie-talkies but eventually lost contact. Â Rumor has it that Morgan will be back this season, and so, could it be Rick’s long-lost friend from Atlanta on the other end of the line?

Now, these are pretty good theories, unless you know a little bit about the comic book series. In the comics, Rick is in absolute shock, and the phone call is just a figment of his imagination with Lori on the other end. Boy, that scenario would really suck. But, folks, as we have learned over and over again with this series, the writers aren’t using the Kirkman comics as a “script” for the television series, and so, who knows what may happen.

Then, we have this growing relationship of Andrea (Laurie Holden) with the Governor (David Morrissey). Since Andrea seems to be a magnet for bad guys and losers, it shouldn’t surprise us that these two may end up hooking up. Good God, what does Andrea want? Is it her dream to be the Governor’s wife and step-mother to his walker daughter, Penny?

It’s still two days until the next Walking Dead episode, and if the suspense is just killing you, here are some sneak peeks.

Wow, aren’t Andrea and the Governor getting cozy here! Ewww, Andrea, you can do better!

The Walking DeadÂ airs this Sunday at 9 p.m. EST on AMC.