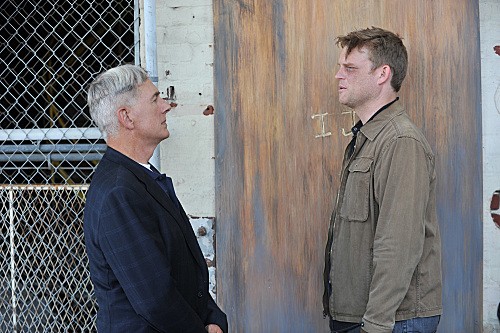 In the last new episode of NCIS two weeks ago, there wasnâ€™t much of a case, and instead, the focus was on the characters.Â  It was a fantastic episode, and in my opinion, some of the best episodes of the series concentrate on character development.Â  But, there are exceptions, and tonightâ€™s episode is one of them.

The episode opens to what appears to be a brutal attack, possibly by a gang. One of the targets is a Captain Joe Westcott (Brad Beyer), and the other is his best friend, Michael Torres.Â  Both are badly beaten, but for some strange reason, the attackers retreat from Westcott, dragging Torres away while heâ€™s screaming for his life.Â  Westcott, out of fear or just shock, runs away.

I think from the get-go, most viewers knew that something wasnâ€™t quite right.Â  When Westcott was questioned, he said there were multiple attackers, but with Abbyâ€™s (Pauley Perrette) analysis, there were only two.Â  Westcott was also acting erratically, even attacking his own brother who comes in from Ohio to try and help.Â  Then, of course, the big question is why in the world did the attackers back off Westcott only to drag Torres away to kill him.

We have all come to know Dr. Mallard (David McCallum) as the resident amateur psychologist, but Gibbs (Mark Harmon) has pretty good instinct as well.Â  After researching Westcottâ€™s tour in Uganda, it is discovered that his group was ambushed without warning, several good men were killed in his unit, and just like this particular attack, Westcott just froze and ran.Â  It had PTSD written all over it.

But, what comes next is the shocker, which is what makes this episode so fabulous.Â  PTSD usually manifests itself when some particular event triggers a bad memory, and the subject acts out in an erratic, and often violent, way.Â  We do find out that Captain Westcott did attack someone â€“ a Randall Cursey â€“ instead of being attacked himself like he had claimed.Â  From all indicators, it was just a random attack.Â  Cursey may have walked like an enemy he knew in Uganda, looked like him, or some other reason that really made no sense.Â  But, whatever it was, it was enough to send Westcott into survival mode, which ended up getting his best friend killed trying to break up the fight.

But, as I said at the beginning of this review, this episode actually had a fantastic case, which is rare for this series that concentrates primarily on the characters.Â  So, you know thereâ€™s some punch line â€“ and there was, and it was a big one.Â  Westcott wasnâ€™t hallucinating or losing his mind â€“ Cursey was on the enemyâ€™s side in Uganda, and Westcottâ€™s memory was real.Â Â  When this was revealed, I yelled a big â€œHoly sh*t!â€ at the television.Â  What a marvelous twist!Â  A terrorist right under our noses, and boy, I canâ€™t wait until the 2nd part next week!

On a more positive note, an NCIS episode wouldnâ€™t be a real episode without some personal side to it, and this week it relates to Tony (Michael Weatherly).Â Â  For some reason that we really donâ€™t know, Tony is going through some of his old fatherâ€™s belongings and finds an old camera.Â  When the film is developed, it reveals some pretty hilarious photos of young Tony Dinozzo but also some of his mother.Â  Weâ€™ve been introduced to Dinozzo Sr. and what an ass he can be at times, but we know very little about Tonyâ€™s mother.Â  Apparently, she either left or died when Tony was very young, and it seems to be something that Tony is struggling with.Â  My guess is his womanizing father ran her off, but that remains to be seen.Â  Iâ€™m hoping weâ€™ll get more development on that storyline later in the season.Â  The Tiva shippers should also be pleased as this produced a very nice, tender moment between Tony and Ziva (Cote de Pablo). Ziva could tell Tony was genuinely upset and really wanted to help.Â  Awww!!

All in all, this was a fantastic episode. NCIS may be a primarily character-driven show, but every now and then, it can deliver an episode with a case that will just blow you away.Â  This was certainly one of them.Â  Is next Tuesday here yet?

A few interesting tidbits and quotes

Too Much Chemistry: 6 TV Couples Who SHOULDN'T Keep It In Their Pants

Character Development: The Student Becomes the Teacher, Damages “I’ve Done Way Too Much For This Girl”

Speculate This: Will Michael Betray Nikita?