The Walking Dead “Say The Word” 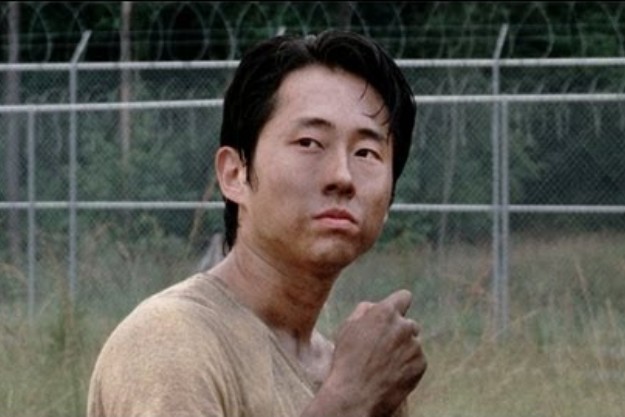 You remember the scene in season one when Merle (Michael Rooker) flew off the handle and Rick (Andrew Lincoln) had to handcuff him to the roof?Â  Well, I think someone in the group needed to do the same with Rick tonight because the guy has completely fallen off his rocker.Â  Man, I do understand his grief, but Jesus Christâ€¦

So, the recovery from the slaughter from last week begins.Â  In the past, when other members of the group, like Dale (Jeffrey Demunn), had been killed, Rick had always stepped up as a strong leader, held a nice funeral, and provided closure for the rest of the group.Â  He didnâ€™t even come close tonight, and instead, Glenn (Steven Yeun) had to step up to the plate.Â  He begins the dreaded task of digging the graves for the dead, and enlists the help of the two remaining prisoners, Axel (Lew Temple) and Oscar (Vincent Ward).Â  This tells us that in a way, Glenn is starting to trust these outsiders, but on the other hand, he confides to Hershel (Scott Wilson) that maybe they should have just killed them all the first time they met them.Â  Itâ€™s unclear whether they will eventually be accepted into the group, but now with Rickâ€™s group smaller after their losses, something tells me that they will.

While Glenn is playing the role of the leader of the group, Rick is on a warpath killing every walker in sight in the prison, partly out of sheer rage, and also, I suspect to find his wifeâ€™s body so that he can bury her.Â  Just like last week, Andrew Lincoln delivers a top-notch performance, and the pain, guilt and rage Iâ€™m sure we all could feel.Â  But, the big questions arise when he finds the location of where Lori supposedly gave birth.Â  He finds the bullet that we assume is from Carlâ€™s (Chandler Riggs)Â gun when he shot Lori, but Loriâ€™s body is nowhere to be found.Â  Thereâ€™s a walker nearby who obviously just had a large meal, but walkers generally donâ€™t eat entire bodies.Â  Walkers eat flesh and leave the skeletons behind. So, whereâ€™s the body (or what remained of it)?

Oh, The Walking Dead, writers, youâ€™re killing us.Â  As soon as I saw the missing body, I thought of two possibilities.Â  Either Carl missed Lori when he shot her (either intentionally or not), and so, sheâ€™ll show back up as a walker â€“ or sheâ€™s not dead.Â  I could have missed it completely last week, but I donâ€™t remember Maggie (Lauren Cohen)Â or Carl checking for a pulse.Â  Lori could have just passed out and could still be alive.Â  I seriously doubt it, but damn it, the writers sure did a fantastic job keeping us guessing on this one!

Now, what about the festivities at Woodbury?Â  As soon as the Governor (David Morrissey) said it was â€œjust him and his daughterâ€ in last weekâ€™s episode, I yelled â€œHoly sh*t!â€ at the television.Â  Even with my not knowing everything about the comic series, I immediately knew that she had to be undead because we hadnâ€™t seen her yet.Â  That also explains why he keeps Milton around like he is some God, because he needs him to run those experiments and try and find a cure.Â  We all can see that the Governor is a ruthless dictator, but at that moment when he is trying to comfort his daughter, Penny, who doesnâ€™t even have any clue of who he is anymore, I honestly felt sorry for the guy.

However, that sympathy quickly fades after we are introduced to the infamous arena battles.Â  Weâ€™ve all heard rumors about them, but really didnâ€™t know the details until tonight.Â  Initially, when I read about them, in a way I thought they might be a good idea.Â  Thereâ€™s no 100% guarantee that the residents of Woodbury are safe, and the town could be overrun by a herd anytime.Â  Each and every one of them needs to learn to effectively fight walkers.Â  And, how do you learn to fight walkers?Â  You do so by fighting them in a controlled environment like an arena. But, as it turns out, thatâ€™s not what these battles are about.Â  Walkers are put in the ring (but with their teeth removed rendering them harmless), but the battles arenâ€™t with the walkers but with the residents of Woodbury.Â  Who does the Governor think he is, the Emperor of Rome?Â  The Governor claims it increases the morale of the people of Woodbury and they enjoy it, but Iâ€™m with Andrea (Laurie Holden) â€“ itâ€™s just sick.

By this time, Michonne (Danai Gurira) has already left, and I bet Andrea wish she had followed.Â  As safe as Woodbury may seem, the Governor is coo-coo for Cocoa Puffs, and Iâ€™d be getting the heck out of dodge.

Lord, with everything that has happened in just these short 5 episodes, no telling what is coming.Â  I do have to say that this is, by far, the best season thus far.Â  Season one was OK, but season 2 was a little too slow and too much time was spent on that farm and looking for Sophia.Â  This season, in contrast, has just been one gigantic roller coaster ride with no end anywhere in sight.

Oh, and then, thereâ€™s the phone call in the prison.Â Â  Holy crapâ€¦ Do we really have to wait another damn week!

The Vampire Diaries "The Killer"

Gone Too Soon: Bill Forbes Dies, The Vampire Diaries “Bringing Out the Dead”