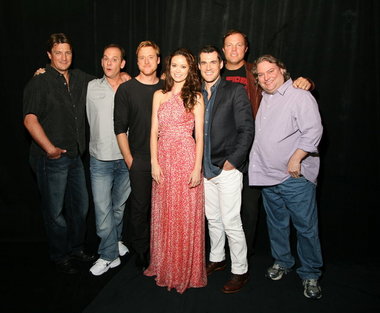 After months of intense buzz and two blockbuster panels at both San Diego and New York Comic-Con, it’s finally time for the main event â€”Â FIREFLY: BROWNCOATS UNITEÂ tomorrow night at 10 p.m. EST on the Science Channel reunites Joss Whedon, Nathan Fillion and the entire renegade crew of the Serenity for the first time ever to provide the complete oral history on the franchise that continues to explode in popularity â€” despite meeting its end a decade ago. The 60-minute special includes secrets from the set, exclusive cast interviews, and footage from this year’s colossal Comic-Con panel that dominated the pop culture conversation. Joining Whedon and Fillion forÂ FIREFLY: BROWNCOATS UNITEÂ are SerenityÂ crew membersÂ Sean Maher, Summer Glau, Adam Baldwin, Morena Baccarin, Alan Tudyk, Gina Torres and Jewel Staite; along with executive producer Tim Minear and executive story editor Jose Molina.

“When Science Channel began airing FIREFLY in 2011, we immediately realized that these fans are a subculture united by a unique and fanatical passion for the series,” says Debbie Adler Myers, general manager and executive vice president of Science Channel. “Our goal is to present them the series they love â€” but in a totally new and surprising way. Whether that’s through exploring the science behind the show or reuniting the entire cast for the first time, we want Science Channel to be the home for Browncoats everywhere.”

TV Goodness was fortunate enough to be able to screen this groundbreaking special, and I must tell you that if you are aÂ FireflyÂ fan at all, this is something that you can’t miss. Â The cast are all back together like it was just yesterday, describing the unique chemistry among the actors, and also, what they felt may have caused the demise of the show (yes, I can hear all of the “Boos” now!!). Â However, even with the show’s cancellation after only 3 months on the air, the show’s popularity continues to increase as is evidenced by the flocking of tens of thousands of fans this year at Comic-Con, both in San Diego and New York (yes, I was at both SDCC and NYCC this past year and tried to attend these events but nearly got stampeded to death in the attempt!).

Since the end-run of the show, the series star Nathan Fillion has continued on to other projects, most notably as Richard Castle on the highly popular ABC dramaÂ Castle. Â But, even still, he is more than happy to participate in all of the Firefly fan events. Â “The sheer volume of people is just the first part of it,” Fillion said recently of the Comic-Con events. “Then you have to get down to how excited these people are. It’s incredible energy. It’s a very visceral feeling.”

“The way I see it is there are people who love ‘Firefly’ as much as I do. ‘Firefly’ has a very special meaning to me, so I share in that excitement. It’s easy for me to understand it”,Â  Fillion reveals.

Fillion remembers the experience like it was just yesterday and relishes the memories. Â “I remember the first time I put on my costume, walked onto the ship for the first day of work … and the director of photography, David Boyd, saw me and hollered out, ‘Captain on deck!’ and everyone stopped and clapped. Â That’s a moment I’ll never forget”.Â

Well, we all agree with you, Nathan. Â FireflyÂ and its Serenity are not things that have been forgotten, and I don’t anticipate they ever will be anytime in the near future.

UNLOCK EXCLUSIVE VIDEO NOT SEEN IN THE SPECIAL

Besides the hour-long special that is airing tomorrow night, there are also nearly 2 hours of extra footage that didn’t make it into the show. Â The two hours of footage is divided into 4 videos, each of which will be “unlocked” and available for viewing if enough people tweet about the Firefly 10th Anniversary Special.Â  Â If you are unaware of this event, then click on our storyÂ Firefly 10th Anniversary: Flock to Unlock [VIDEO] to help unlock these exclusive video clips. As of now, 3 out of the 4 videos have been unlocked, but we still need everyone to continue tweeting to get that 4th video. So, let’s get busy everyone!

So, FireflyÂ fans, you better clear your schedule for the entire day tomorrow! Science Channel’s FIREFLY Sunday extravaganza begins at 7AM ET/PT with an all-day marathon of the series. Then, at 10PM ET/PT, the event Browncoats everywhere have been waiting for â€”Â FIREFLY: BROWNCOATS UNITEÂ premieres on Science Channel. Â Be sure to followÂ @ScienceChannelÂ on Twitter and use the Twitter hashtagÂ #FireflyNov11Â both now and during the broadcast of the show.