Person of Interest “The High Road” 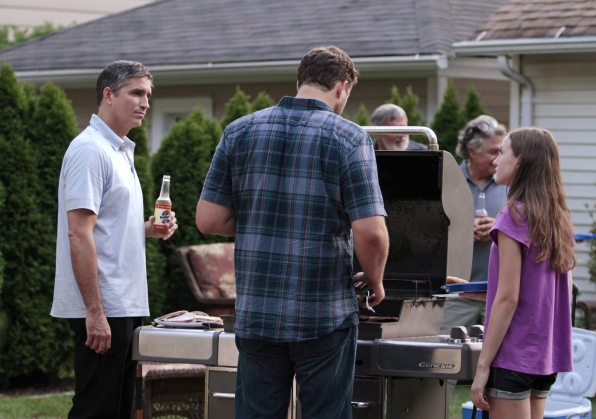 For those of us who have been with the series since the beginning, you should recall this quote from the season one episode â€œNo Good Deedâ€, where we get to meet Finchâ€™s (Michael Emerson) former fiancÃ©e, Grace (Carrie Preston), and learn how they met.Â  What a tearjerker.Â  Unlike past episodes, this one isnâ€™t as action-packed, with cars being wrecked, dozens of people getting beat up, and all of the other crazy things Reese (Jim Caviezel) usually does in a typical episode.Â  Instead, itâ€™s more about relationships, and as an extra bonus, we learn a secret about The Machine.

In the exclusive clip that was previewed at New York Comic-Con, we learn that Reese and Zooey Morgan (Paige Turco) get to play house and go undercover as man and wife in one of the cases for season two.Â  Tonight, we finally are treated to this, and itâ€™s off to the idyllic suburbs for newlyweds John and Zooey â€“ too funny!Â  The case centers on Graham Wyler (David Denman), who from the looks of his perfect family and picket-white fence house, appears to have nothing to hide.Â  But, as we know, The Machine is never wrong, and so, thereâ€™s definitely more than meets the eye.

Graham Wyler turns out not to be Graham Wyler, but instead a Lloyd Pruitt, a very gifted safe cracker wanted in several states for a series of robberies well over a decade ago.Â  So, why is he in danger?Â  Graham decides to get out of the business on the very last job, leaving his amateur buddies to do the dirty work, which ultimately gets them caught.Â  For the past 12 years theyâ€™ve been in prison, and now, itâ€™s time for payback.Â  Graham has to promise to do one last job, or else his entire cover will be blown and heâ€™ll lose his perfect life â€“ including his lovely wife, Connie, and daughter â€“ forever.

Graham does go through with it, but in the end, takes the high road just like the title of this episode indicates.Â  He tells his wife everything and turns himself into the authorities.Â  We all expect Grahamâ€™s life to be over as he knows it, but you know what?Â  Sometimes doing the right thing and just having some faith does reap big rewards.Â  He makes a deal to avoid any jail time, and that loving, devoted wife of his completely forgives him.Â  Now, thatâ€™s true love.

This particular case is not really important for any real reason except one â€“ it draws a very good parallel with Finch and Graceâ€™s (who we find out tonight has a last name of Hendricks) relationship.Â  I called Finch Mr. Matchmaker last week because of his smooth talking to get Reese a date, but I think the bigger Matchmaker may be The Machine. Yes, oh yes, The Machine has some secrets, and this may be one of them.Â Â  In a series of flashbacks, we see The Machine always pointing Grace out to Finch and leading him back to her.Â  The Machine reveals to Finch that she has absolutely nothing to hide, she helps people at a homeless shelter — sheâ€™s, well, perfect.Â  Itâ€™s almost like The Machine had done this huge analysis on each of them and knew they were soul mates.Â  It was nice to finally see the infamous scene of Finch introducing himself to Grace eating that ice cream cone in January, but it was also so sad knowing the ending.

We all know that Finch made the decision to disappear to protect Grace, but Graham Wyler makes the same decision.Â  Yet, Grahamâ€™s wife chooses to stay with him, even if it means some of those goons getting out and coming after them again.Â  The bottom line: it was Connieâ€™s choice, not just Grahamâ€™s.Â  At the end of the episode, we see Finch staring at that picture of Connie, and I canâ€™t help but wonder if he was thinking â€œWhat if?â€Â  My dear Finch, itâ€™s still not too late!Â  Hopefully, this wonâ€™t be the last weâ€™ll see of Grace.

The last character we learn a little more on is Finchâ€™s former business partner, Nathan Ingram (Brett Cullen).Â  Up until tonight, I had almost a God-image of him.Â  He was super-smart, handsome, charismatic, and appeared to have his moral compass pointed in the right direction.Â  But, now we see a little of the bad side.Â  The guy was married and having a fling with a twenty-something.Â  With the look on Finchâ€™s face, he certainly didnâ€™t approve.Â  I wonder how much more â€œdirty laundryâ€ weâ€™ll find out about this guy this season.

All in all, this was a fantastic episode, just like most, if not all, episodes of Person of Interest.Â  The action didnâ€™t keep your heart racing every single second, but we learned a great deal more about our dear characters, and thatâ€™s what I see as the biggest strength of this series.Â  Oh, and yes, for all of the Reese and Zooey shippers out there â€“ thereâ€™s definitely some chemistry there.Â  I certainly donâ€™t believe those late-night poker games were just for fun.

Person of Interest airs on Thursday nights at 9 p.m. EST on CBS.

What They Said: Favorite Quotes from The Vampire Diaries "The Killer"

What We Learned in Haven: "Magic Hour (Part One)" [VIDEO]

Hellcats “Nobody Loves Me But My Mother”