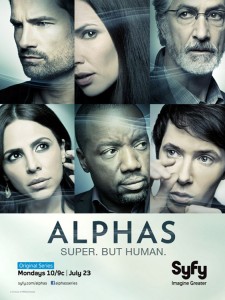 After last week’s Alphas — “When Push Comes to Shove” — we’re wondering: 1. What state Nina will be in this week. Will she be back working with the team? 2. How will the team react to her now that they were able to save her from killing herself? After all, she “pushed” almost the entire team at one point or another. Nina got lucky. She was able to escape her crime spree without doing any time. Hope she sees that and is able to kick her Rosen-labeled addiction and become a contributing member to the Alphas once again.

Lauren Holly guest stars in tonight’s all new Alphas. Holly is probably best known for her roles in the movie Dumb and Dumber and on NCIS where she played Director Jenny Shepard for a few seasons. But she was also Julie Chandler on the daytime soap All My Children; starred in the quirky David E. Kelley series Picket Fences;Â and had a role on the CBS medical drama Chicago Hope (a show that also featured future NCIS stars Mark Harmon and Rocky Carroll).

Syfy Synopsis for “Gaslight”: Rachel is kidnapped and the culprit may be an Alpha in a comatose state.

Â Digital Magazine: 8 Alphas Powers You Wish You Had

SurrealEstate Preview: “A House Is Not a Home”