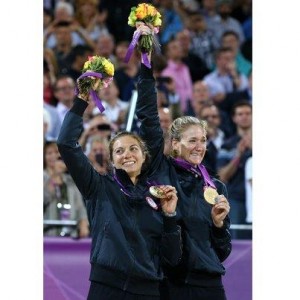 So happy Misty May-Treanor and Kerri Walsh Jennings were able to go all the way and win gold in Beach Volleyball for Team USA. This historic Olympic gold three-peat definitely solidifies their legacy as the preeminent women’s beach volleyball team of all time.

Now on to tonight’s lineup on NBC from 8pm – Midnight ET/PT:

The Scoop: Four days after the 100m, Jamaicaâ€™s electrifying sprint king Usain Bolt returns for his second final of the Games, the 200m. Bolt won both races in Beijing â€“ both in world record time â€“ and is aiming to become the first man in history to sweep the sprints twice. American Wallace Spearmon is hoping to erase the bitter memory of four years ago, when he crossed the line in third but missed out on a bronze medal because of a lane violation. Boltâ€™s chief competition could be his own training partner, Yohan Blake, who is the second-fastest 200m runner in history. In the decathlon, track and fieldâ€™s grueling two-day event wraps up with a pair of Americans expected to compete for gold: two-time world champion Trey Hardee and Ashton Eaton, who set a world record at Trials in front of his home crowd in Eugene, Oregon. In the menâ€™s 800m, Nick Symmonds pursues perhaps an even more elusive target: Kenyan world record holder David Rudisha. And in field events, the triple jump duo of Christian Taylor and Will Claye, who finished 1-2 at the World Indoor Championships, try to extend their dominance to the Olympic stage.

The Scoop: Â At the Aquatics Centre, Americaâ€™s high divers take to the 10m platform, the same event that produced the last U.S. diving medal, when Laura Wilkinson won gold in Sydney. Twelve years later, among the new generation of women taking the three-story Olympic plunge will be Brittany Viola, whose father Frank was the 1987 World Series MVP with the Minnesota Twins.

The Scoop: And in BMX, all the thrills and spills of the most action-packed 40 seconds in sports return to the Olympics as the quarterfinal heats get underway. The top American is Connor Fields, a 19-year-old from Las Vegas.

For more Summer Olympics info, surf on over to NBCOlympics.com.