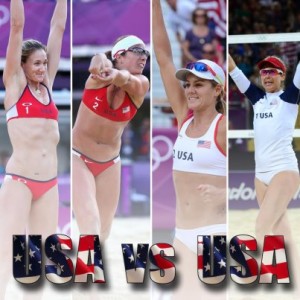 Not going to lie — we’re extremely excited for tonight’s Beach Volleyball Gold Medal match. It’s an all-American final, after all. Misty May-Treanor and Kerri Walsh Jennings go for the Olympics three-peat versus 2009 World Champs Jen Kessy and April Ross. Which Team USA pair will get the gold and bragging rights?

The Scoop: The stars are out on the track Wednesday night as Team USA goes for what could be a major gold rush. In the womenâ€™s 200m final, the Americans will go toe-to-toe with Jamaicaâ€™s top threats, including two-time Olympic champion Veronica Campbell-Brown. Los Angeles native Allyson Felix, the two-time Olympic silver medalist in the event, will attempt to claim an elusive gold. Teammate Carmelita Jeter is hoping her unparalleled 100m speed can last as she doubles her distance. While Sanya Richards-Ross, the 400m bronze medalist in Beijing, may be attempting to complete a rare 200m-400m double. In the 400m hurdles, a gold for reigning world champion Lashinda Demus would help erase the pain of missing out on the Games in Beijing when she finished fourth at Trials. It would also be a family affair: Demus, who gave birth to twin boys in June 2007, is coached by her mother and managed by her husband. In the 110m hurdles, a stacked field features top Americans Jason Richardson and Aries Merritt, who have both won world titles in the past year, squaring off against the two fastest men in history and last two Olympic champions, Dayron Robles of Cuba (2008 gold, world record holder) and Liu Xiang of China (2004 gold, former world record holder.). And in the long jump, Brittney Reese has dominated her event like no other athlete since Beijing, and in London hopes to collect the one piece of hardware she still needs: Olympic gold.

The Scoop: At the Aquatics Centre, Americaâ€™s high divers take to the 10m platform, the same event that produced the last U.S. diving medal, when Laura Wilkinson won gold in Sydney. Twelve years later, among the new generation of women taking the three-story Olympic plunge will be Brittany Viola, whose father Frank was the 1987 World Series MVP with the Minnesota Twins.

The Scoop:Â  The womenâ€™s beach volleyball tournament concludes with the gold medal final. Americans Misty May-Treanor and Kerri Walsh Jennings, who swept through the Athens and Beijing tournaments without dropping a set, are the two-time defending champions.

For more information on all things Olympics, head on over to NBCOlympics.com.