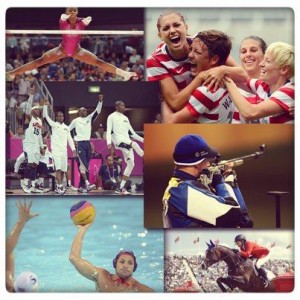 We’re over a week into the 2012 Summer Olympics and there have been so many great moments. How amazing was it that Great Britain’s Andy Murray won the gold in Men’s tennis in front of a hometown crowd? And what makes this win even sweeter: he defeated Roger Federer, the man who had just beat him last month to win the Wimbledon championship. Serena Williams getting the gold for the U.S. in Women’s Singles and Doubles (along with her sister, Venus) was pretty cool, too. Plus, it’s official. The electrifying Usain Bolt is still the fastest man in the world, having won the 100m in Olympic record time.

The Scoop: Three more gold medals are up for grabs in gymnastics, with the womenâ€™s uneven bars and the menâ€™s rings and vault. Gabby Douglas is one of the best bars workers in the world. On the menâ€™s side, Chinese strongman Chen Yibing, the reigning world and Olympic champion, will try to cement his status as king of the rings. American team captain Jonathan Horton, who improved dramatically in the last year in this upper body event while nursing a broken foot, is the top American. And on vault, South Koreaâ€™s spring-loaded 19-year-old sensation Yang Hak-Seon showcases the worldâ€™s most difficult vault.

The Scoop: On the track, 19-year-old Caribbean Kirani James, the reigning world champion, is favored to win Grenadaâ€™s first ever Olympic medal in the menâ€™s 400m. While in the hurdles, two-time Olympic champion Angelo Taylor and two-time world champion Kerron Clement join first-time Olympian Michael Tinsley on an ultra-deep U.S. team. And in the pole vault, Beijing silver medalist Jenn Suhr, who is coached by her husband Rick, renews her rivalry with two-time defending Olympic champion Yelena Isinbayeva of Russia.

The Scoop: On the sand at majestic Horse Guards Parade, the quarterfinals of beach volleyball continue, with a single loss meaning the end of an Olympic run. Americans Jake Gibb and Sean Rosenthal are vying to win their first Olympic medal.

The Scoop: Â In the Aquatics Centre, former Georgia star Chris Colwill and Texas alum Troy Dumais, the first American since Greg Louganis to compete at four Olympics, take aim at the worldâ€™s best in the menâ€™s springboard.

Get all of the Top NBC Moments of the 2012 Olympics, day-by-day, here, and stay locked onÂ  NBCOlympics.com to get all of the latest highlights and news.

Some of the U.S. Swimmers get in on the “Call Me Maybe” craze: