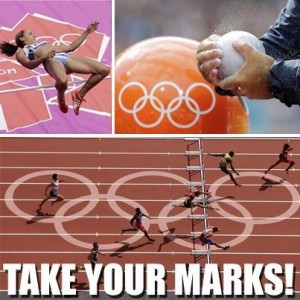 We’re still basking in the glory that is Gabby Douglas winning the gold yesterday in the Women’s All-Around competition. She’s officially the Queen of Gymnastics.

Be sure to tune in tonight and watch Michael Phelps swim his last individual event of the Games, the 100m Butterfly â€“ will he win the gold like he did last year (by .01 of a second!)? Will Missy Franklin break the 200m Backstroke world record? Also, tonight kicks off the long-awaited track and field medal rounds. Donâ€™t miss the Menâ€™s Shot Put gold medal final â€“ sure to be an explosive and exciting event to watch!

Here’s the lineup of events airing from 8PM – Midnight ET/PT on NBC:

The Scoop: Michael Phelps hits the water for his final individual race â€“ the 100m butterfly, which he memorable won in Beijing over Serbiaâ€™s Milorad Cavic by just .01 seconds â€“ a margin undetectable to the naked eye. Colorado phenom Missy Franklin is a heavy favorite in the 200m backstroke and figures to threaten the world record. While another teenager, Bethesda, Maryland native Katie Ledecky, who at 15 is the youngest member of the U.S. Olympic swim team, swims in the 800m freestyle, in which Great Britainâ€™s reigning Olympic champion Rebecca Adlington is the favorite. The night also includes the menâ€™s 50m freestyle. Known as the â€œsplash and dash,â€ the fastest event in swimming is notoriously hard to predict, but Auburn-trained Brazilian Cesar Cielo has done his best to take the mystery out of the results, winning this event in Beijing as well as at the two world championships since. Chasing him will be 2008 relay gold medalist Cullen Jones and Anthony Ervin, the 2000 co-gold medalist in this event who remarkably returned to the top of the sport after a nearly decade-long absence.

The Scoop: On the first night of track and field, the U.S. has three strong medal contenders in the menâ€™s shot put in Reese Hoffa, Christian Cantwell and Ryan Whitingâ€“ all of whom own world championship titles. Hoffa, who can solve a Rubikâ€™s Cube in under a minute, posted the worldâ€™s best throw at the Olympic Trials.

The Scoop: In womenâ€™s volleyball, Team USA, which faces an up-and-coming Serbia squad tonight, is favored for its first ever Olympic gold medal. It would be the second in a row for the teamâ€™s head coach Hugh McCutcheon, who coached the U.S. men to the Olympic title in 2008.

For more information on all things Summer Olympics, head over to NBCOlympics.com.

Who Do You Think You Are Season Premiere Preview: “Cynthia Nixon” [VIDEO and PHOTOS]