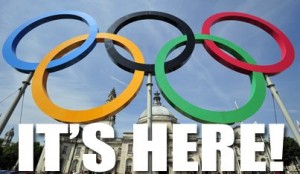 Coming up tonight on NBC, some potentially amazing golden opportunities for Team USA including swimmer Ryan Lochte going for his second gold. It all airs from 8pm – Midnight ET/PT. The lineup:

The Scoop: In what should be one of the best races of the Games, reigning world champion Ryan Lochte takes on a stacked international field in the 200m freestyle. Meanwhile, 17-year-old Colorado phenom Missy Franklin appears in her first individual final, among the favorites in the 100m backstroke. In the 100m breaststroke, reigning world champion Rebecca Soni tackles the first leg of a breaststroke sweep no woman has accomplished in 16 years. And Matt Grevers aims to win the fifth straight U.S. gold in the 100m backstroke, following the retirement of Athens and Beijing champion Aaron Peirsol.

The Scoop: In gymnastics, the U.S. men will contend for their third consecutive medal in the team competition. Their prospects look strong with a deep group led by an unlikely pair of newcomers: Bronx native John Orozco and Cuban-born Danell Leyva.

The Scoop: Beijing veteran David Boudia and new partner Nick McCrory, a Duke pre-med student whose uncle won swimming silver for Great Britain in 1976, are bidding to win the first U.S. diving medal since the 2000 Sydney Olympics. Great Britainâ€™s teen idol Tom Daley and his partner Peter Waterfield are among the other contenders hoping to upset the Chinese.

The Scoop: Beach volleyball, one of the Gamesâ€™ hottest sports, comes to Horse Guards Parade in the heart of ceremonial London. Just down the road from the Queenâ€™s home at Buckingham Palace, the Queens of the sand, Misty May-Treanor and Kerri Walsh Jennings, are eyeing a golden three-peat after sweeping the competition in Athens and Beijing without dropping a set.

For all things Summer Olympics, head over to NBCOlympics.com.

Syfy Preview: Alphas "The Quick and the Dead" [PHOTOS & VIDEO]