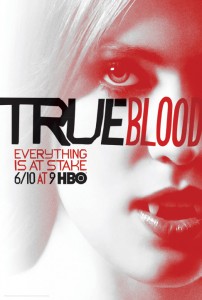 The preview clips for Sunday’s new episode of True Blood, “Let’s Boot and Rally,” highlight some of our favorite characters to watch in season 5.

First up, Bill and Eric find out the stakes have been raised big time in their quest to bring down Russell Edgington once and for all. Emphasis on stakes. Big emphasis. You’ll see what we mean.

Next, we get a quick glimpse at a conversation featuring Jessica and Tara. At first, we weren’t quite on board with Tara becoming a vampire. But we’ve been coming around on the matter and can’t wait to see her continued interaction with her maker, Pam. And now, we’re totally intrigued at a potential Jessica/Tara friendship. Tara’s recent supernatural development has resulted in her True Blood universe being opened up a bit and that’s a very good thing.

What They Said: Favorite Quotes from True Blood "Let's Boot and Rally"

Being Human Preview: “If I Only Had Raw Brain” [VIDEO]