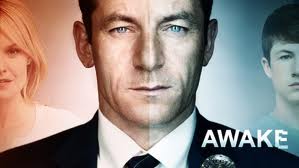 If you’re like us, you just couldn’t wait until Thursday to watch the premiere of Awake. Not only have we been hearing about how great the pilot is for at least a month, but we’ll watch ANYTHING Kyle Killen chooses to put on the air. Yes, we thought Lone Star was gone too soon – although we’ve been so happy to see James Wolk on Shameless and Happy Endings and Eloise Mumford on The RiverÂ this season. So for Kyle to come back to TV so quickly with another audacious premise just sets our hearts racing…in a good way.

Let’s get something out of the way right now: We love Jason Isaacs. We had no idea he was going to be on our TV. In the US. On a Network. Every Week.Â (Ok, ok in researching this we found out we knew it last May. Our bad, but still!) Â If you’re a fan like we are, you probably already knew he’s another “coulda, shoulda been Bond” (if you haven’t seen his recent six-part Masterpiece series, Case Histories, get on that). What we love about him is that he’s perfectly happy breathing life into complex, interesting characters likeÂ Awake’s Michael Britten. And even better? He’s also a producer.

NBC very graciously put the pilot online and we’re happy to say the show delivers a wonderfully dark, sad, happy, and complex story that Isaacs delivers the hell out of.Â Britten survives a car accident in which his wife dies and his son survives. In a pretty nifty setup, he also exists in a world where his son dies and his wife survives. It’s unclear which is the waking reality, because every time he closes his eyes he’s in one world or the other. We love this premise, but let us just say right now if we ever find out he’s been dead all along we will cut somebody. Seriously.

At the heart of the show isÂ Michael’sÂ job-mandated therapy. The respective therapists have their own theories that his alternate realityÂ dream state is a coping mechanism that willl eventually send him around the bend. Our favorite part of the pilot (and it’s been in the promos so stop reading now if you haven’t seen those) is when heÂ very matter-of-factly states that if getting well means sacrificing his wife or his son, he never wants to improve. The wayÂ Isaacs delivers that line is just chillingly effective.

In the reality where his wife – Hannah – is alive, Michael’s tried to talk to her about their son,Â Rex. But she’sÂ very clearly moving on without him: starting school, redecorating the house, and yearning for another child. When he tries to share what he’s experiencing with their son as a way to keep him alive for her, too, she can’t hear it. Until the closing moments of the pilot, when she realizes maybe she can.

In the reality where Rex is alive, Michael’s having a really hard time connecting with his son.Â Rex was closer to his mother andÂ Michael’s job creates a bit of added distance – just whenÂ it seems like there might be a breakthrough, his job demands his attention. And what about this job?Â He’s a detective in both his waking and sleeping worlds with different partners and different cases that bleed into each other, which we love.

More of the pedigree

Superb work all the way around. The pilot reminds us a lot in tone ofÂ The Others, a Glen Morgan/James Wong showÂ we have previously mentioned in conjunction withÂ Suits’Â Gabriel Macht. It was also on NBC, butÂ we sincerely hope in the case of Awake that audiences embrace it and it runs longer than a teaser 13 episodes. It’s not a fast-paced show, but it earns every moment you spend with it.

AwakeÂ premieres on Thursday, March 1 at 10 pm/9 c on NBC. You can catch previews and behind-the-scenes snippetsÂ here.

ALL PHOTOS COURTESY OF NBC.

Moment of Goodness: McGee Gets Himself a Probie, NCIS "Need to Know"