Season 5 of USA Network’s Burn Notice is coming to an end this Thursday and we feel the need to celebrate in a big way. Thanks to the folks at USA, we’re giving away a Burn Notice fan pack that’s valued at $200. A cool type of reward for such a hot show, right? As a special treat, Bruce Campbell (Sam Axe) will be live tweeting during the East Coast airing of the finale on USA Character Chatter!

So to win the fan pack, here’s what you have to do:

The Burn Notice Fan Pack is valued at $200 and features: 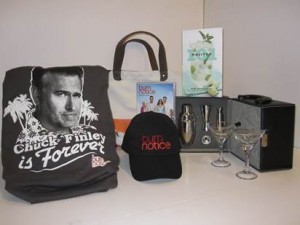 Remember, the Burn Notice Season 5 finale airs Thursday December 15 at 10/9c on USA Network. The episode has a slew of guest stars including Jere Burns, Eric Roberts, Dean Cain and Kristanna Loken. We’ve seen the finale and it’s good, intense and might even make your heart ache a little bit.–Tina Charles

The prizes were provided by USA Network but USA Network is not a sponsor, administrator, or involved in any other way with this giveaway. Contest open to US residents only.

This contest is closed.