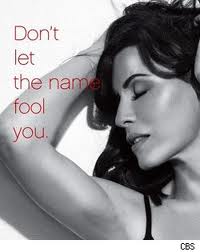 Now that the show’s moved to a new day and time, it’s got a new attitude as well (the new ad campaign is sexy!). We’ve (impatiently) been waiting for The Good Wife to return and with that only hours away we’ve got a lot of questions. Now that Will and Alicia have slept together, what’s next? Will Alicia’s relationship with Kalinda ever be healed? Will the Cary and Peter’s unholy alliance bear any fruit? What will it be like to have Eli working in the same office as Alicia? Is Peter still planning to run for office now that he no longer has Alicia in his corner? What’s next for Diane? All good questions, right? But before we even think about getting those answered we’ve got to take some time to admire the view. We’re crushing on some of the guys in the office big time.

Kara: I’ve been a fan since Sports Night. Â For me the attraction has always been both about his looks and intelligence. If a guy is smart, funny, and attractive I’ll be his forever and one of the things I love about Josh Charles is the role he picks. In television, his roles are never expected or two-dimensional. And now with Will Gardner, I think he’s portraying a man of infinite layers. There is so much we don’t know about him and I love that. I’ve got to give some love to Robert and Michelle King for a few things: creating such a wonderful show and making each and every character fascinating. With Will Gardner, they’ve created a guy who’s got great looks and a great job. But we know there’s at least one thing in his past he’s hiding and I’ve gotta be honest and say that’s hot too. Will is kind of a bad ass and that’s extremely sexy.

Tina: When I think of Josh Charles, I always have to go back to Dead Poets Society. He was so fresh-faced and beautiful. His role as the lovestruck Knox Overstreet was innocent and romantic – I instantly loved him. Gotta say I really enjoyed him on Sports Night too. That show was brilliant and he was a big part of that. Having said all that, I think Josh has been at his finest on The Good Wife. Finest in the sense that he’s at the top of his game acting-wise; he brings it on a weekly basis in his scenes with the show’s powerhouse women Julianna Margulies, Christine Baranski and Archie Panjabi. On the outside, Will looks like he’s a nice guy. But, as we know, he’s not afraid to get his hands dirty. And that’s hot. He’s also at his finest in the sense that he’s so damn sexy. I mean, there’s a reason Will Gardner is Chicago’s 16th most eligible bachelor…in my opinion.

Kara: Matt Czuchry didn’t come onto my radar until The Gilmore Girls. Even though I think he’s really cute, I’m not a huge fan of his character on The Good Wife – and I like that. His motivations are selfish (which I guess is true for all of us) and his methods can be devious. I could also say that about Will Gardner, but I like Will Gardner. Personally I don’t want to see Cary with Kalinda, but I know there are people rooting for them. And even though I’m not a huge Cary fan, I am a Matt Czuchry fan. I really like the way he plays Cary and when I’ve seen him in person he’s so nice and so cute. An actor who makes me hate his character and love him personally has got some serious skills, and that is just one more thing that makes him hot.

Tina: I admit to only being semi-familiar with Matt before The Good Wife. I wasn’t a hardcore watcher of Gilmore Girls, so I never got the full effect of Czuchry’s appeal. Now I get it. As Cary Agos — I love that character name so much — he’s a bit of a devil. Cary’s great at his job but has this even greater sense of entitlement. He has this moral compass that’s skewed slightly off. It’s all good when he tries his cases; but away from the courtroom — in the exotic, politically-charged jungles of Stern, Lockhart & Gardner or the State’s Attorney’s office — all bets are off. I want to hate this guy but I can’t. There’s something redeemable about him. My favorite Matt scenes — aside from the ones where Cary battles Alicia in court and outside the court — are the ones he shares with Archie Panjabi’s Kalinda. There’s something there. I don’t know if they’ll ever get together but I relish their deepening friendship with just a hint of something more. And the shallow part of me just enjoys Matt as eye candy. The devilish sparkle in his eye; the super sexy smirk that often conveys he knows more than what he’s revealing; and he’s just plain hot. ‘Nuff said.

The Good WifeÂ airs SundaysÂ at 9/8C on CBS.

What They Said: Favorite Quotes from Nikita "Game Change"

The Exodus is a Ghost Ship, The River “Peaches”

We Need to Know: Is Booth Finally Ready to Admit His True Feelings to Bones (Again)?

House of Lies “The Mayan Apocalypse”

The Vampire Diaries: One True Pairing