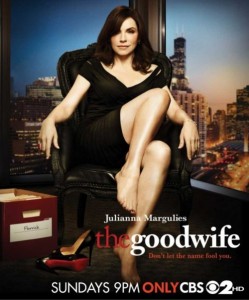 So, here’s the thing. It took me entirely way too long to get into The Good Wife. For the last year there have been a million tweets about why this is a show to watch. Actually, why it’s THE show to watch. I’ll admit, one of the biggest hurdles for me is that it’s not just a character-driven show, it’s part legal drama. And I’ve tried to stay away from those kind of series for a long time. Fortunately, this summer, two new shows I quickly grew to love were USA Network’s Suits and TNT’s Franklin & Bash. My no legal show rule was pretty much obliterated. And thus, I cheated with choosing The Good Wife as my honorable mention considering it really isn’t a summer TV show. However, this summer, I watched both Seasons 1 and 2 while I probably should have been out at the beach having fun in the sun. It was so addictive it only took me a little over a week to catch up. Consider me hooked. Why?

The writing. Stellar. Emmy Worthy. It also helps that the words are uttered by an amazing cast of actors. The characters have substance. The cases are almost always fascinating. The political portion of the show is suspenseful — the one that involves Peter Florick’s scandal and subsequent campaign for State’s Attorney; as well as the politics that often threaten to explode at Stern, Lockhart & Gardner. The drama can be devastating or sexy or devastatingly sexy. The writers nail it in every episode.

The judges. I’m kind of in love with all the guest judges and how they all have their own distinct — and oftentimes over-the-top quirky — personalities. I can’t get enough of Denis O’Hare’s Judge Charles Abernathy and Ana Gasteyer’s Judge Patrice Lessner. In my opinion. Actually, it is in my opinion that this is one of my favorite aspects of the show.

The guest stars. Remember how I said there isn’t a weak link in the regular cast? Well, there’s also hardly a weak link in the impressive list of guest stars this show manages to unload on us week after week. Michael J. Fox, Martha Plimpton, Gary Cole, America Ferrara are just a few. The writers utilize these guest shots in such creatively satisfying ways. And these visiting actors certainly give it their all as well. I’m definitely looking forward to who they’re lining up for the third season.

Yes, I’m on board for new episodes that are going to be coming to us on a new night. The Good Wife Season 3 premieres Sunday September 25 @ 9/8C on CBS. And I recommend anyone who isn’t watching this show to get with the program pronto.

Dancing with the Stars “Season 17 Week 9” aka Trio Night