Moment of Goodness: The Talking Lion on The Good Wife 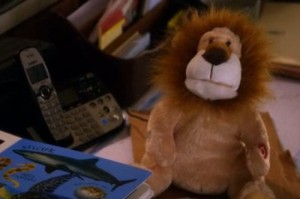 Who knew a little Talking (and dancing) Lion would have such an impact? I don’t think I’m the only one who had to Tivo back and watch the scene again. The first time I was delighted and fascinated by the lion. But I had to go back and watch the scene again and actually listen to the dialogue. The lion makes the scene memorable (and I watched itÂ again and again), but the actors doing the work in that scene make it my moment of goodness.

We’ve known about Kalinda and Peter since last week. As more people learn of their indiscretion, the truth is getting harder to hide. In the Talking Lion scene, investigator Tim Guinee‘s Andrew Wiley questions Cary about the reportÂ Matan sent him on Blake’s last interview. It should be five pages but two pages are missing.Â Matan says he talked to Cary about it, which he did, but Cary says he doesn’t know the details – which is technically true. But Glenn Childs wants Cary and Andrew to get down to the bottom of these missing notes. He doesn’t want Matan interviewed because the issue is political but he wants to know what Matan’s hiding. Childs and Wiley assume Matan has “lost” those pages so he can use them for political gain later. But they think he’s hiding something criminal.

For me this scene is a lot of great things all rolled up into one. Obviously there is an excellent sight gag. I mean I could watch this scene at least ten more times for the Talking Lion alone. And I’ve already watched it five times. I love that Wiley is doing a number of things here. He’s trying to see if he can catch Cary in a lie and he’s trying to figure out why Carey is protecting Kalinda. AndÂ obviously, he’s also trying to find out what Matan’s hiding.Â Glenn assumes Cary’s still on Team Childs and wantsÂ him to work with Wiley to get to the bottom of this. But most of all I would say Childs wants to go out in a blaze of glory. He figures whatever Matan is hiding is huge and if he’s being forced out of the state’s attorney’s office, he could use one last big case to make an impression. He’s smart. I hope this isn’t the last we’ve seen of Titus Welliver.

Bonus moment: Eli Gold freaking out at the beginning of the episode. Loved every minute of it.

Relationship Recap: Alicia vs Tammy on The Good Wife

Speculate This: The Last "Eye-Catching" Scene Of NCIS "Two-Faced"

It’s Complicated: Things Get Deadly Serious, Being Human “Do You Really Want to Hurt Me?”