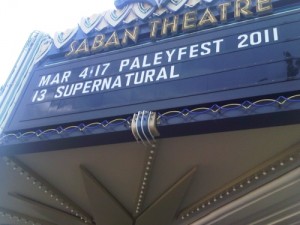 From the moment it was announced that Supernatural was going to be one of the shows honored at the 28th Annual William S. Paley Television Festival, I was completely psyched. The afternoon didn’t disappoint.

The Paley Center for Media always likes to start these PaleyFest events with a clip from the past — something that ties into the show that’s about to be featured for an entire evening (or afternoon, as is the case with Supernatural). In 2006, the Supernatural session kicked off with a clip from the classic series Route 66, which is about two guys in a cool car driving around the country meeting new people and getting caught up in their troubles or struggles. This time, the Paley people gave us classic Dinah Shore (an entertainer/talk show host before she died in 1994); she came on the screen singing a jingle that turned out to be for Chevrolet. What started out as a “huh” moment turned out to be a clip that was connected to one of our favorite characters on Supernatural, the ’67 Chevy Impala.

TV Guide Magazine Editor-in-Chief Debra Birnbaum started things off nicely. She talked about Supernatural winning the very first fan favorite cover and with fans amassing five million votes in favor of their show. She also teased the Magazine’s upcoming Fan Favorite issue and mentioned how a couple of the hit show’s actors were present at a photo shoot that very day. My best guess? Jensen and Misha.

So, so you think you can tell Heaven from Hell,
blue skies from pain.
Can you tell a green field from a cold steel rail?
A smile from a veil?
Do you think you can tell?
And did they get you to trade your heroes for ghosts?
Hot ashes for trees?
Hot air for a cool breeze?
Cold comfort for change?
And did you exchange a walk on part in the war for a lead role in a cage?

Loved that last line especially. Mo also introduced Supernatural‘s current showrunner, Sera Gamble, who set up what we were about to see. Not only were we going to get a recap of Season 6, we were also going to get a couple of treats: an extended version of Sam and Dean’s bad acting adventures from “The French Mistake” as well as a little bit of the upcoming much-anticipated Western episode.

The Road So Far was well done. Set to The Four Tops tune “Are You Man Enough,” the S6 rewind was great to watch with an entire audience full of fellow SPN lovers. The recap segued into the extended cut of the Winchesters epic failure into the world of acting. It was hilarious, with Misha mouthing “what the hell” and Sam being all fidgety and acting with his arms and Dean getting into “Dean character” which was just another form of blue steel combined with an overly deep, gravelly voice…it was awesome. Then it was time for a couple clips of the upcoming Western episode, which airs April 22 on the CW. Was Dean wearing a pancho? Sam had on a pretty tame shirt; but damn if I didn’t totally melt when I saw that stand-off at high noon between Dean and some other cowboy. I cannot wait until this Guy Bee-directed episode airs. Is it April yet?

We Need to Know: Would You Turn Your Own Family In For Breaking the Law?

Tune-In Alert: The Young and the Restless on TVGN