It was announced that Stephen J. Cannell passed away Thursday night due to complications associated with melanoma. The prolific producer was responsible for so much TV Goodness especially in the 70s, 80s and 90s. His shows were campy fun andÂ sometimes a little cheesy but they were also extremely entertaining and featured great casts.Â They were the ones I grew up watching either first-run or in repeats. Plus, his Stephen J. Cannell ProductionsÂ bumper that ran at the end of the credits was a classic; it was simply Cannell sitting at his typewriter finishing up a page of a script.Â He was trulyÂ one of the kings of TV. My six favorite Stephen J. Cannell shows:

The A-Team: To this day this is one of my favorite TV shows of all time. I went and saw the recent movie because of my love for the 80s action series. John “Hannibal” Smith, B.A. Barracus, “Howling Mad” Murdock and Templeton “Faceman” Peck were four awesomely iconic characters. Silk Stalkings: I just had so much love for this USA Network detective series that starred Mitzi Kapture and Rob Estes. Actually it started on a very experimental CBS late night programming package called “Crimetime after Primetime.” The chemistry between Detectives Lance and Lorenzo really sealed the deal for me.

21 Jump Street: How can one ever forget the vehicle that not only helped launch a network (FOX) but also helped launch the career of Johnny Depp? He was the breakout star of the show but I loved them all including Peter Deluise, Dustin Nguyen and Holly Robinson. 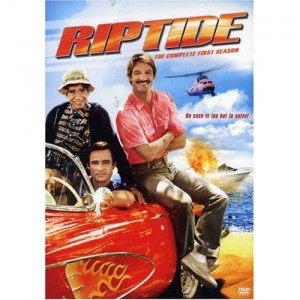 Riptide: I always thought I was the only that was into this show back in the day but this detective series lasted three seasons so maybe I was a little wrong. It starred Joe Penny (Nick) and my personal favorite, Perry King (Cody). The private eyes operated out of Cody’s boat. It wasn’t the best show but I remember being hooked on it.

Hardcastle and McCormick: Daniel Hugh Kelly was McCormick to Brian Keith’s Hardcastle. The ex-con and the judge made for such an odd pairing but I totally bought it hook, line and sinker. Wow, I just looked it up. The show ran for three seasons but I could have sworn it was on longer. Regardless, it was definitely appointment television Sunday nights on ABC for me.

The Greatest American Hero: Three reasons why I loved this show: 1) The theme song; 2) The story about a bumbling teacher turned superhero when he’s given a red suit by some aliens; and 3) The awesome cast which included William Katt, Connie Sellecca, Robert Culp and a pre-Eddie and the Cruisers Michael Pare.

DVDs for many of the Stephen J. Cannell productions can be found at Amazon.

What were your favorite Stephen J. Cannell shows?